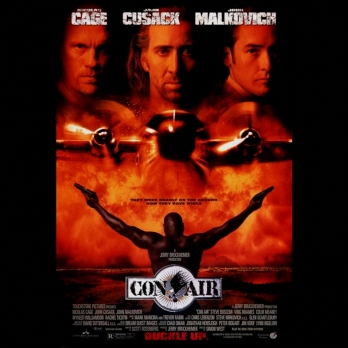 Con Air (Part 1 of 10) by caemia
It was an honor to be working with Jerry Bruckheimer again.  The cast was also a true pleasure to work with.  I was always a fan of Nic Cage.  John Malkovich is a grand titan of the acting world, John Cusack, Steve Buscemi, Ving Rhames, Dave Chapelle and there I was, headlining with them.

If I’d died the next day, my life would’ve been complete.

Con Air is an 1997 American action–thriller film directed by Simon West and produced by Jerry Bruckheimer, producer of The Rock. It stars Nicolas Cage, John Cusack, Colm Meaney and John Malkovich. The film borrows its title from the nickname of the Justice Prisoner and Alien Transportation System. While scanning a newspaper article, Screenwriter Scott Rosenberg first learned of the special program, then visited its Oklahoma City base “to get an eyewitness perspective of the incredible operation, which quickly formed the genesis for Con Air.” [1]