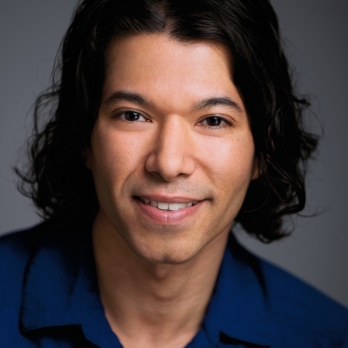 Renoly Santiago is known to audiences worldwide for his memorable performances starring with Hollywood’s most respected actors in four number one blockbuster films.  He is a critically acclaimed actor and singer who’s work displays undeniable range and versatility.  He made his film debut in ‘Dangerous Minds’ alongside Michelle Pfeiffer in his touching portrayal as the troubled student, Raul.  His movie credits include: ‘Hackers’ with Angelina Jolie as the Phantom Phreak, in which the late, great film critic Roger Ebert said “Renoly Santiago is especially interesting as the Latin genius named Phreak.”, ‘Daylight’ with Sylvester Stallone as the inspirational recovering drug addict, Mikey, also ‘Con Air’ with Nicolas Cage and John Malkovich as the unforgettable crossdressing con, Sally Can’t Dance .

He appears in indie films such as ‘Punks’ at Sundance Film Festival, ‘The Street King’, ‘Just Another Romantic Wrestling Comedy’ and ‘Lavoe: The Untold Story’, as Latin music legend Johnny Pacheco. Among his episodic television appearances are guest leads in ‘Law & Order: Criminal Intent’, ‘Touched by an Angel’, ‘Big Apple’ and ‘Stand Up’. Renoly was nominated for a Drama Desk Award by the press as Outstanding Featured Performer in a Musical in his Broadway debut ‘The Capeman’ written and composed by Paul Simon.  He starred alongside Marc Anthony, Ednita Nazario and Ruben Blades.  Of his stage work Alvin Klein of the New York Times has said, “With his high spirits, physical and vocal agility and infectious personality, it’s clear that Renoly Santiago knows how to work a room.”  He has appeared in many off-Broadway productions under such notable directors as Liz Swados in Lincoln Center, in workshops with Graciella Danielle in ‘Blood Wedding’ and Gabriel Barre in the Kander & Ebb musical ‘Skin of Our Teeth’ with Audra McDonald and Sara Ramirez.  Comedy, drama, or in any medium; Santiago has been called a chameleon. Renoly is known to disappear behind the roles he plays. His writing credits include: the Emmy-nominated television series ‘City Kids’ in which he was also a lead character and the book to the musical ‘Bring in the Morning…A Wake-Up Call’ at the Apollo Theater in Harlem, New York starring Lauryn Hill.

As a singer, Renoly can be heard as back-up for recording artist India on her album ‘Latin Songbird’, duetting with Danny Rivera and Marc Anthony amongst others, having performed with many artists of international renown.  A true and consummate professional, whether it’s a major studio film production or an experimental theatre piece, it’s about the quality of the script that is a determining factor that’s gets Renoly interested in a project. Renoly was born in the enchanted island of Lajas, Puerto Rico.  He was raised in Union City, New Jersey and resides in New York City.  He also enjoys being an invited speaker at schools, events and college campuses, handing out half a million in college scholarships with the Ronald McDonald Children’s Charties at Yankee Stadium or teaching a Master Class at the New York Film Academy.  He is currently developing new acting, writing and production ventures across some exciting genres at home and abroad, writing new songs in English and Spanish and is presently recording music for his debut album. Renoly’s next feature film is ‘Grand Street’ with Kelly McGillis, due out in 2013.

From Wikipedia, the free encyclopedia (following)

Renoly Santiago
Born March 15, 1974
Lajas, Puerto Rico
Years active 1993 – present
Renoly Santiago (born March 15, 1974) is a Puerto Rican actor, singer and writer who has appeared in a number of high-profile Hollywood productions.
Santiago first became known in the United States when he participated in the 1993 television series CityKids, as “Tito”. He co-wrote the Emmy nominated pilot episode of the show. From his participation in CityKids, Santiago graduated to film, acting as “Raúl Sanchero” in 1995’s Dangerous Minds.[1] By 1996, he was co-starring alongside some other well-known Hollywood actors in his role as “Ramόn Sánchez”, a.k.a. the “Phantom Phreak” in Hackers.[2] He also plays “Mikey” in Daylight.

Renoly Santiago in 2009
Santiago starred as “Ramón Martínez” (a gay cross-dressing criminal nicknamed “Sally-Can’t Dance”)[3] in the 1997 film Con Air.[4] Santiago then took three years off acting on screen and starred on Broadway in Paul Simon’s The Capeman as “Tony Hernandez – Umbrella Man”, leader of the gang “The Vampires”, a role for which he was a 1998 Drama Desk Nominee for Outstanding Featured Performer in a Musical.
As a singer, Santiago has recorded with award-winning, legendary performers Marc Anthony, Paul Simon, Danny Rivera and La India.
In 2000, he returned to the screen in the low-budget film Punks, shown at the Sundance Film Festival, where he plays “Dante”.[5][6] By 2001, Santiago was back on television, playing “Miguel Acosta” in the January 7 episode of Touched by an Angel, making a small appearance at the March 29 episode of Big Apple and as “Chiggy Rios” on the October 17 episode of Law & Order: Criminal Intent.
In 2002, Santiago made another film called The Street King, where he played “Cesar Rojas”. It was not a major hit, and Santiago took another three-year sabbatical from screen acting. Santiago returned to film in 2005, as “Scorpio” in Just Another Romantic Wrestling Comedy. Released in early 2011[dated info], he stars in the salsa biopic about Hector Lavoe The King as “Johnny Pacheco” and filmed in Spring 2011, Renoly will appear in Grand Street[disambiguation needed] in which he stars with Kelly McGillis.